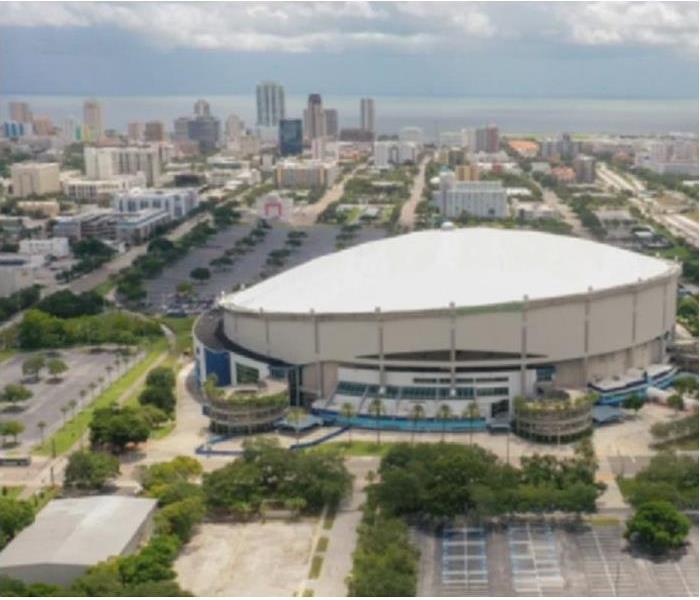 No matter the size of your business, SERVPRO can handle all of your water damage needs..

The city of St. Petersburg is situated in Pinellas County, in Florida, United States. In 2020, it was estimated that the city had a population of 271,842, ranking it as the fifth most heavily populated city in Florida. It is also the second largest in the Tampa Bay Area, with Tampa being the largest. Tampa, St. Petersburg, and Clearwater together create the second largest Metropolitan Statistical Area in Florida. It has an estimated population of 2.8 million. The city is located between the Gulf of Mexico and Tampa Bay in the Pinellas peninsula. Mainland Florida connects with the town to the north.

John Constantine Williams founded the city in 1888. Williams bought the land, and then Peter Demens brought railroads into the area. Williams and Demens held a coin toss to name the community. Demens named the land Saint Petersburg, Russia, after winning the bet. Sr. Williams also titled the first hotel, calling it Detroit Hotel. On February 29, 1892, the city was incorporated as a town, and on June 6, 1903, it was re-incorporated as a city.

The Home of Arts

In 2011, the American Style magazine categorized the city as its top mid-size city, naming it as a vibrant arts scene. St. Petersburg is home to various arts, making it one of the best street art cities worldwide. The town is among the top three places to visit in Florida.

According to CNN, around 15 percent of the population is above 65 years, making it the seventh-best place to retire.

The city's historic destinations and iconic beaches make it a perfect getaway. Recently, the International Cities of Peace granted St Petersburg the honor of joining 290 other cities in the U.S as an International City of Peace. It was the second city in Florida to have the title.

The city is home to a children's museum, the Great Explorations, which includes a program center and a pre-school. The city also hosts the Dr. Carter G. Woodson museum. The African American Museum highlights Carter G. Woodson's life. Some of Woodson's accomplishments include founding the Associated Publishers and writing close to 30 books.

If your commercial property has incurred water damage from a burst pipe or leaky roof, it is essential to handle the problem immediately. That is why SERVPRO restorers are available 24-hours every day.

Immediately we receive your call, our team of technicians can respond within the shortest time possible.

Even small amounts of water can result in long-term problems like mold growth and odors. If the damage goes unnoticed for an extended period, wooden structures may swell and warp, leading to costly repairs. We can dry and dehumidify your property using state of the art equipment to bring things back to normal.

Water damage can cause severe damage to your business within a short period. Contact SERVPRO of NE St. Petersburg at (727) 522-0000 for a reliable restoration to make it "Like it never even happened."